Bad Guys is shaping up to be the type of drama that not only holds a few things back but grapples cases that may not be “ripped from the headlines,” yet never get old or worth the exploration. It opened with an illusive serial killer, (who wasn’t as guilty as expected) and stepped into a ring of organ traffickers, culminating in a lucrative trafficking business run by a convicted pimpstress.

Human trafficking is very real and formidable, and here, was treated as the well-known minacious practice it is, without abating or distending —though perhaps, milking a teachable opportunity for the rehabilitation of our boys. The thing that keeps me loving this drama is my supreme addiction to “bad men,” for they always fascinate and attract me. Men that aren’t reckless or unruly boys, with hot tempers and rebellious dispositions, but grown men, conscious and culpable of their actions, who have made choices counter to culture, with minds and motivations hardened through their experiences and jaded by their circumstances.

Drama, for now, may not delve as dark or deliberate as it could (or I’d like), but deliciously, explores four such men; peering through the looking glass. And while I don’t think this story essays to be a veritable rediscovery of the human penchant or desire for “goodness” or justifiable redemption and reformation [Thanks drama gods ;)], it certainly tackles the individual’s bout with personal conviction. 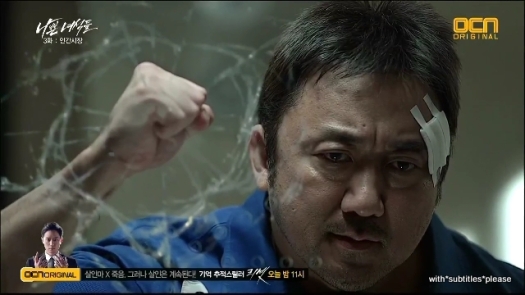 Unnichan: Those first two episodes threw us into the action just the way I love to be; without warning and prep. But I have to admit, I felt a little betrayed when our guys were sent back to jail. I know there were no guarantees, but it reminded me, that in this type of setup, there are no rules unless they are completely spelled out. And sadly, they hadn’t been, not yet anyway.

Ekun: I am glad I am not the only one who felt slighted by the “back to prison we go” moment. But in these 2 episodes (3-4) it made me think, “It is a damn shame we have to call on inmates to do the job we pay the police to do.” So thankfully, we are able to see our “Mad Dogs” catch criminals once again. If only there was a way to turn over those tax dollars to them…

Unnichan: Uh… no. But, it is a sad thing though. It’s crazy how they do the push-pull with these guys who truly have no choice. The only thing I’m glad we got this time around is more rules, more benefits and more time with our guys. These episodes were about human trafficking and seriously, I was sick.

Ekun: Look, I just can’t even fathom half of the foolishness we heard and saw in these last 2 episodes… Like when that “pimp” said that girl was “spoiled” and she will be lucky if they do not kill her for her organs… WHO SAYS CRAP LIKE THAT??!!! But we did have more time with the boys and a very interesting development between Woong-chul and Jung-mun…

Unnichan: The statement was surprising because it came across so common place. Even Tae-soo looked at that fool like “WTH?!” I think that to me is the best thing about these two episodes, seeing these three men as more than property and more like men who’ve done horrible things. It causes them to reveal their own hypocrisy, or rather the hypocrisy of humanity— “My sin is less than yours…” blah, blah, blah. The whole, “I may be bad, but not that bad.” That pimp and later Madam Hwang give no thought to the value of human life outside of monetary gain. It’s repugnant and despicable but how are they any different than Jung-mun, Tae-soo and Woong-chul? For, they too made choices that put a value on human life that had very little to do with what is considered humane.

Ekun: A very true statement indeed, and the fact that they were stunned was a ray of hope in my heart and as a viewer. We all make choices based on whatever reason: money, circumstances, feelings, but I think there is a line that even hypocrites try not to cross. It just seems worse to take innocent girls off the street for organs…

Unnichan: It does. And that is the thing. These cases are opening their eyes to the worlds of people, their crimes and their motives and I like that. It reminds me of the conversation Jung-mun and Woong-chul had as they were hiding out—

Woong-chul wondered about Jung-mun’s motives in helping him during the rain slasher case [Woong-chul spies the perp and gives chase but is subsequently attacked, laying in the street when Jung-mun shows up and instead of running down the assailant, he stops for Woong-chul.] and Jung-mun was clear that for him, this isn’t about minimizing his sentence, but more about getting to know himself. In the end, that will be everyone’s story and I look forward to watching that unfold. Woong-chul is such an impressionable character in that he has a big heart and tons of loyalty. He isn’t as cold or dark as the other men.

Ekun: He really isn’t. Who knows why he got caught up in the game, but we know that this whole task to eliminate Jung-mun is eating away at him. The rift between being loyal to Hyungnim and what he believes to be right. UC, I need him to live so we can see him in season 2! But they are already plotting!

Unnichan: Lol! I am so glad you brought this up because though I’d love another season, I am so afraid someone is going to die during this show and I just can’t shake it! If it’s Dong-hyuk Oppa…. *keels over and weeps*

Ekun: Biased much? I don’t want anyone to die, if they must kill someone… kill them all and start fresh for season 2!

Unnichan: Oh I can’t do that either. I say, they all live but perhaps sustain major injuries and scare us a bit throughout the season. Much like Jung-mun in this last episode. But before, we have this girl who’s kidnapped and kept locked up so her organs can be fresh, Goo-tak makes an interesting statement to Mi-young– “As long as you think of finding the person alive, they will be. What’d you think about that?” I can say I certainly liked the idea that Goo-tak is jaded but hopeful in his own way, still after all these years.

Ekun: I think as soon as you expect to find a dead body, you are no longer working against the clock and looking for a killer. If that ray of hope is gone, there is no urgency to complete your task. I like it, it may not be true all the time; but the alternative is far worse.

Unnichan: I would agree. I needed this girl to live. And I like we saw a female fight to live. It’s not that we don’t see it, but women are considered so fragile and unable to survive, we also are seen as much more vulnerable, not only by men, but by women as well.

Ekun: And if we are talking physically, we are at a disadvantage (statistically speaking). Since we are discussing women, Mi-young “upped” her game once she found out little cop was working with that scary faced Madame… I was proud that she was able to hold her own and not just full of hot air. 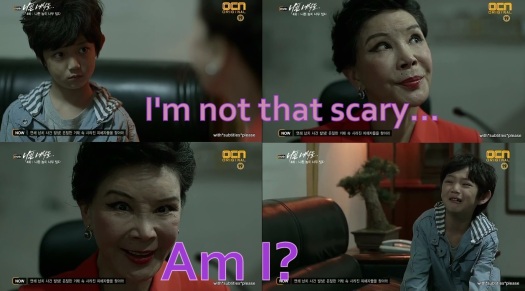 Unnichan: Am I the only one that never paid that driver any attention until this episode? He was practically invisible and then I knew something was wrong when I finally noticed him [Thank you, PD]. And Mi-young certainly stepped things up for me because she’s been nothing less than a Debbie Downer for the first three episodes but when she did what she needed to do and then slapped Madam Hwang… well, I had to give her some props. She’s a very intelligent woman but at times I find her dogma being her downfall. Like she can’t see beyond her own understanding and interpretation of events or crimes, even people. This whole incident showed some fire in her and I appreciated it.

Ekun: Well I needed it, for I felt like I was going to scream in the first 3 episodes (and I did) because of her haughtiness. I need more fire, less questions, and eyes wide shut from her.

Unnichan: Ok so these episodes were a game changer in that the boys have a more concrete “contract,” Woong-chul has been given the task to kill Jung-mun in two weeks and the thing I loved… the boys worked together as a unit for the very first time. They all pulled together and used each others’ strengths to complete a mission…

Ekun: It was the best episode to date, and I have high apple pie in the sky hopes for the rest of the show. The boys, Goo-tak finding his killer, Mi-young growing a girl “pair”… I don’t see why people wouldn’t want to watch this show!

Unnichan: Well, the ratings are great and ever increasing so I think everyone agrees with you. I mean with an episode like this one, where everyone is barricaded in this compound filled with rabid killers, it was nerve wracking trying to figure out how they were going to get out alive. And honestly, if it hadn’t been for Tae-soo’s call to Mi-young, her breaking free and the Commissioner, they wouldn’t have. It’s that kind of stuff that keeps you coming back. Not the violence but the scrapes that they don’t divert but confront head on, scared to death but fight and live. With each episode, these men make those choices not just for and about themselves alone but because they want to be something more— better. 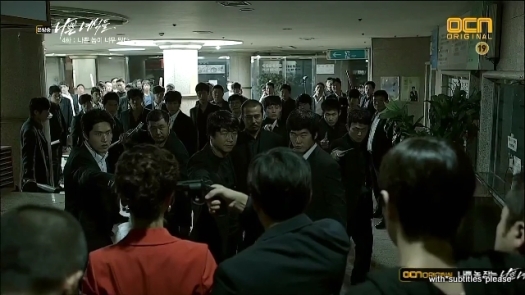